Men attend boot-camp workouts in Naperville for the fitness, but stay for the fellowship and faith

No matter the weather or season, Joe Kessler watches the sun rise most days while executing jumping jacks, arm circles or sit-ups in a local park. He’s not alone.

The Oswego resident is one of the roughly 100 hearty men who venture outside multiple times a week to exercise in parks around Aurora, Oswego and Naperville as part of F3, a boot-camp workout where the three F’s stand for fitness, fellowship and faith.

F3 Naperville, which will celebrate its one-year anniversary in September, traces its roots to the F3 military-style workout founded by two men in Charlotte, N.C.

The premise is simple: Workouts are free and open to all men no matter their fitness level or faith. The early morning sessions are led by fellow participants on a rotating basis.

He also noted Females in Action, or FiA, is a peer-led version of F3 for women, though there are no chapters in Illinois.

The biggest challenge, Kessler said, is that all workouts are held outdoors. That’s rain or shine, hot or cold. We’ve never cancelled for weather,” he said. And, yes, Kessler recalls several days last January where the temperature was below zero and a dozen or so guys showed up. “You learn to dress for it,” he said. 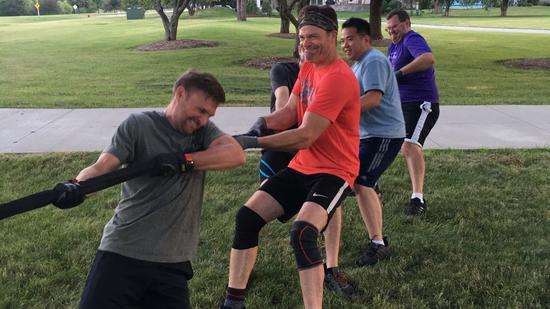 Sometimes peer-leaders will bring in equipment such as ropes as part of the boot-camp workout at an F3 Naperville session. (Joe Kessler)

A typical day starts with stretching warm-ups in what is known as the Circle of Pain, he said. It might be followed by a quarter- or half-mile run before the leader for the day starts the military-style workout routine.

Workouts can include personal exercises such as burpees, push-ups and bear crawls or they might use apparatus such as monkey bars or picnic benches located in the park.

Kessler said the men often pair up to complete the series of skills together.

While he started because of the fitness aspect, Kessler said the camaraderie and fraternal nature of the group keeps men coming back.

“It’s less about the fitness. … They stick around now for the fellowship,” Kessler said.

It’s an opinion shared by others.

Jason Dubiel, of Naperville, started attending in June at the invitation of a friend.

“Initially, I was just looking for a place to get a good workout in because I was trying to lose weight. But I quickly learned that it’s much more than just a workout, hence the 3 F’s: Fitness, Fellowship and Faith,” Dubiel said.

Now he tries to attend as much as possible, usually three to four times per week at either at the Frontier Sports Complex or Waubonsie Lake Park.

“This is really a great group of men who are trying to improve themselves in multiple facets of life, and we all have each other’s backs. What’s there not to like about that?” Dubiel said. 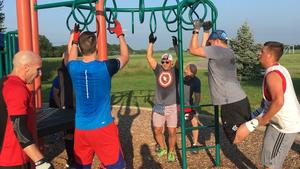 Naperville resident Jeremy Atkinson said he was just looking for a good workout and some guys to hold him accountable to keep improving when he first attended June 8.

“It’s addictive,” Atkinson said. “I love the simplicity of F3: outdoors rain or shine, hot or cold, using our bodies and the elements that nature or the workout location provide.”

He said most importantly, F3 allows men to come around each other and hold each other up.

“We like to say it’s more than a workout, and it’s the truth,” Atkinson said. “I came for the fitness, but stayed for the fellowship and faith component.”

Each session ends with a Circle of Truth, a time where the men share any the challenges, victories or needs they or their family and friends are experiencing. Those then are offered up in short prayer.

“One thing you realize is that it’s a safe place. No one’s going to judge you,” Kessler said. “It’s definitely filling a void.”

To nurture the fraternal camaraderie, F3 has its own lexicon, which includes nicknames for the exercises, locations and people.

For example, workouts are available six days a week — 5:15 a.m. weekdays and 7 a.m. Saturdays — at one of the four locations: Hudson Crossing Park in downtown Oswego (nicknamed Foxbury), Crossroads Church off of Wolf’s Crossing Road in Aurora (called Holy Hill), Waubonsie Lake Park in Aurora (aka The Citadel) and Frontier Park in Naperville, referred to as The Outpost.

Newbies get nicknames after they share a bit about themselves.

Hoping for cool name, Kessler said he jokingly shared that he was a stunt man who wrestles alligators for fun.

“It kind of backfired on me. But it’s a badge I wear proudly,” said Kessler, who also goes by the name Captain Underpants.

What started as a core group of 12 to 15 guys has grown to more than 100, which is causing F3 Naperville to consider offering a fifth location.

“Once you start doing it, it becomes almost like an addiction,” he said. “If you can’t make it, you definitely experience FOMO, fear of missing out.”